The Kremlin has been focused on undermining trust in American democracy and elections, but Donald Trump and the Republicans have done it better than Russia ever could. 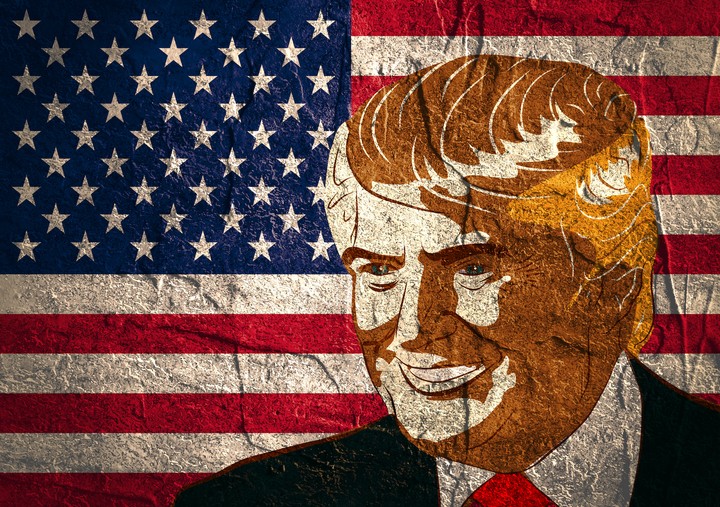 On November 4, 2016, the hacker “Guccifer 2.0,” a front for Russia’s military intelligence service, claimed in a blogpost that the Democrats were likely to use vulnerabilities to hack the presidential elections. On November 9, 2018, President Donald Trump started tweeting about the senatorial elections in Florida and Arizona. Without any evidence whatsoever, he said that Democrats were trying to steal the election through “FRAUD.”

Cybersecurity experts would say that posts like Guccifer 2.0’s are intended to undermine public confidence in voting: a cyber-attack against the US democratic system. Yet Donald Trump’s actions are doing far more damage to democracy. So far, his tweets on the topic have been retweeted over 270,000 times, eroding confidence far more effectively than any foreign influence campaign.

We need new ideas to explain how public statements on the Internet can weaken American democracy. Cybersecurity today is not only about computer systems. It’s also about the ways attackers can use computer systems to manipulate and undermine public expectations about democracy. Not only do we need to rethink attacks against democracy; we also need to rethink the attackers as well.

This is one key reason why we wrote a new research paper which uses ideas from computer security to understand the relationship between democracy and information. These ideas help us understand attacks which destabilize confidence in democratic institutions or debate.

Our research implies that insider attacks from within American politics can be more pernicious than attacks from other countries. They are more sophisticated, employ tools that are harder to defend against, and lead to harsh political tradeoffs. The US can threaten charges or impose sanctions when Russian trolling agencies attack its democratic system. But what punishments can it use when the attacker is the US president?

People who think about cybersecurity build on ideas about confrontations between states during the Cold War. Intellectuals such as Thomas Schelling developed deterrence theory, which explained how the US and USSR could maneuver to limit each other’s options without ever actually going to war. Deterrence theory, and related concepts about the relative ease of attack and defense, seemed to explain the tradeoffs that the US and rival states faced, as they started to use cyber techniques to probe and compromise each others’ information networks.

However, these ideas fail to acknowledge one key differences between the Cold War and today. Nearly all states—whether democratic or authoritarian—are entangled on the Internet. This creates both new tensions and new opportunities. The US assumed that the internet would help spread American liberal values, and that this was a good and uncontroversial thing. Illiberal states like Russia and China feared that Internet freedom was a direct threat to their own systems of rule. Opponents of the regime might use social media and online communication to coordinate among themselves, and appeal to the broader public, perhaps toppling their governments, as happened in Tunisia during the Arab Spring.

This led illiberal states to develop new domestic defenses against open information flows. As scholars like Molly Roberts have shown, states like China and Russia discovered how they could “flood” internet discussion with online nonsense and distraction, making it impossible for their opponents to talk to each other, or even to distinguish between truth and falsehood. These flooding techniques stabilized authoritarian regimes, because they demoralized and confused the regime’s opponents. Libertarians often argue that the best antidote to bad speech is more speech. What Vladimir Putin discovered was that the best antidote to more speech was bad speech.

Russia saw the Arab Spring and efforts to encourage democracy in its neighborhood as direct threats, and began experimenting with counter-offensive techniques. When a Russia-friendly government in Ukraine collapsed due to popular protests, Russia tried to destabilize new, democratic elections by hacking the system through which the election results would be announced. The clear intention was to discredit the election results by announcing fake voting numbers that would throw public discussion into disarray.

This attack on public confidence in election results was thwarted at the last moment. Even so, it provided the model for a new kind of attack. Hackers don’t have to secretly alter people’s votes to affect elections. All they need to do is to damage public confidence that the votes were counted fairly. As researchers have argued, “simply put, the attacker might not care who wins; the losing side believing that the election was stolen from them may be equally, if not more, valuable.”

These two kinds of attacks—“flooding” attacks aimed at destabilizing public discourse, and “confidence” attacks aimed at undermining public belief in elections—were weaponized against the US in 2016. Russian social media trolls, hired by the “Internet Research Agency,” flooded online political discussions with rumors and counter-rumors in order to create confusion and political division. Peter Pomerantsev describes how in Russia, “one moment [Putin’s media wizard] Surkov would fund civic forums and human rights NGOs, the next he would quietly support nationalist movements that accuse the NGOs of being tools of the West.” Similarly, Russian trolls tried to get Black Lives Matter protesters and anti-Black Lives Matter protesters to march at the same time and place, to create conflict and the appearance of chaos. Guccifer 2.0’s blog post was surely intended to undermine confidence in the vote, preparing the ground for a wider destabilization campaign after Hillary Clinton won the election. Neither Putin nor anyone else anticipated that Trump would win, ushering in chaos on a vastly greater scale.

We do not know how successful these attacks were. A new book by John Sides, Michael Tesler and Lynn Vavreck suggests that Russian efforts had no measurable long-term consequences. Detailed research on the flow of news articles through social media by Yochai Benker, Robert Farris, and Hal Roberts agrees, showing that Fox News was far more influential in the spread of false news stories than any Russian effort.

However, global adversaries like the Russians aren’t the only actors who can use flooding and confidence attacks. US actors can use just the same techniques. Indeed, they can arguably use them better, since they have a better understanding of US politics, more resources, and are far more difficult for the government to counter without raising First Amendment issues.

For example, when the Federal Communication Commission asked for comments on its proposal to get rid of “net neutrality,” it was flooded by fake comments supporting the proposal. Nearly every real person who commented was in favor of net neutrality, but their arguments were drowned out by a flood of spurious comments purportedly made by identities stolen from porn sites, by people whose names and email addresses had been harvested without their permission, and, in some cases, from dead people. This was done not just to generate fake support for the FCC’s controversial proposal. It was to devalue public comments in general, making the general public’s support for net neutrality politically irrelevant. FCC decision making on issues like net neutrality used to be dominated by industry insiders, and many would like to go back to the old regime.

Trump’s efforts to undermine confidence in the Florida and Arizona votes work on a much larger scale. There are clear short-term benefits to asserting fraud where no fraud exists. This may sway judges or other public officials to make concessions to the Republicans to preserve their legitimacy. Yet they also destabilize American democracy in the long term. If Republicans are convinced that Democrats win by cheating, they will feel that their own manipulation of the system (by purging voter rolls, making voting more difficult and so on) are legitimate, and very probably cheat even more flagrantly in the future. This will trash collective institutions and leave everyone worse off.

It is notable that some Arizonan Republicans—including Martha McSally—have so far stayed firm against pressure from the White House and the Republican National Committee to claim that cheating is happening. They presumably see more long term value from preserving existing institutions than undermining them. Very plausibly, Donald Trump has exactly the opposite incentives. By weakening public confidence in the vote today, he makes it easier to claim fraud and perhaps plunge American politics into chaos if he is defeated in 2020.

Trump’s lies about vote counting are a cybersecurity problem

If experts who see Russian flooding and confidence measures as cyberattacks on US democracy are right, then these attacks are just as dangerous—and perhaps more dangerous—when they are used by domestic actors. The risk is that over time they will destabilize American democracy so that it comes closer to Russia’s managed democracy—where nothing is real any more, and ordinary people feel a mixture of paranoia, helplessness and disgust when they think about politics. Paradoxically, Russian interference is far too ineffectual to get us there—but domestically mounted attacks by all-American political actors might.

To protect against that possibility, we need to start thinking more systematically about the relationship between democracy and information. Our paper provides one way to do this, highlighting the vulnerabilities of democracy against certain kinds of information attack. More generally, we need to build levees against flooding while shoring up public confidence in voting and other public information systems that are necessary to democracy.

The first may require radical changes in how we regulate social media companies. Modernization of government commenting platforms to make them robust against flooding
is only a very minimal first step. Up until very recently, companies like Twitter have won market advantage from bot infestations—even when it couldn’t make a profit, it seemed that user numbers were growing. CEOs like Mark Zuckerberg have begun to worry about democracy, but their worries will likely only go so far. It is difficult to get a man to understand something when his business model depends on not understanding it. Sharp—and legally enforceable—limits on automated accounts are a first step. Radical redesign of networks and of trending indicators so that flooding attacks are less effective may be a second.

The second requires general standards for voting at the federal level, and a constitutional guarantee of the right to vote. Technical experts nearly universally favor robust voting systems that would combine paper records with random post-election auditing, to prevent fraud and secure public confidence in voting. Other steps to ensure proper ballot design, and standardize vote counting and reporting will take more time and discussion—yet the record of other countries show that they are not impossible.

The US is nearly unique among major democracies in the persistent flaws of its election machinery. Yet voting is not the only important form of democratic information. Apparent efforts to deliberately skew the US census against counting undocumented immigrants show the need for a more general audit of the political information systems that we need if democracy is to function properly.

It’s easier to respond to Russian hackers through sanctions, counter-attacks and the like than to domestic political attacks that undermine US democracy. To preserve the basic political freedoms of democracy requires recognizing that these freedoms are sometimes going to be abused by politicians such as Donald Trump. The best that we can do is to minimize the possibilities of abuse up to the point where they encroach on basic freedoms and harden the general institutions that secure democratic information against attacks intended to undermine them.